Waterbeach Barracks in Cambridge is one of the first decommissioned military sites in the country to be redeveloped for public use. As the building plans come to fruition it will become a great example of brownfield site regeneration.

A former airfield and barracks, the site was previously occupied by the Royal Engineers who re-located to a new home in 2013; making the land redundant for military purposes. The Ministry of Defence has subsequently released the land for the development of 6500 homes, schools, health care and community facilities in an area that is home to many science and technology industries as well as the world renowned Papworth Hospital.

The first phase of the work involved the refurbishment of eight accommodation blocks to provide affordable accommodation for the NHS to rent to key workers, including doctors and nurses. The renovation plans were handled by Lucy Morris at William Sanders Architects in Leeds on behalf of Urban and Civic, the master developer.

Each accommodation block has a range of en-suite bedrooms as well as rooms with shared facilities. After reviewing the showering options, the Kineprime Glass shower cubicle from the Kinedo range by Saniflo was specified by Lucy and a tender for one hundred units was issued to the plumbing merchant sector. The Wolseley Group was successful in its bid to supply the units and the AMR Group from Kings Lynn won the tender to install the bathrooms on site with training provided on location by the team from Saniflo. Lucy was very happy with the service from the team at Saniflo;

After researching the best products for this particular project I chose the Kinedo shower cubicles for the bathrooms because of the ease of installation and time saving over conventional enclosures. The Kineprime Glass units sit in a recess and have interior glass panels; which means no tiles and grouting is required. The panels sit over specially formed upstands on the tray to create a watertight space, so there is no requirement for silicone either. They are supplied with a valve and showerhead which simplifies sourcing and everything comes in one box. In practical terms this makes each unit quicker and more cost-effective to install and they are also very modern so they look nice in the bathrooms.   Due to the configuration of the existing rooms there were a number of potential issues with locating the new showers; one being the location of some extraction fans. Saniflo worked hard to resolve these with us and also sent an engineer to site to train the fitters. No question has ever been too much problem throughout the installation.

Chris Lown is Director at AMR Ltd and oversaw the fit-out. As one of the leading providers of electrical, mechanical, plumbing & heating, fire & security, air conditioning & refrigeration services throughout East Anglia, the company successfully tendered for the Waterbeach Barracks project. The company hadn’t previously installed any Kinedo cubicles, but was impressed with the choice of the Kineprime Glass;

The units were specified by the architect on the job, so we ordered them as we needed them from Wolseley plumbers merchants and worked on the first installation with a member of the team from Saniflo. This was invaluable and anything we have needed since has been sorted very efficiently. Our fitters were very happy with the simplicity of fitting and we would definitely consider these units for future projects. 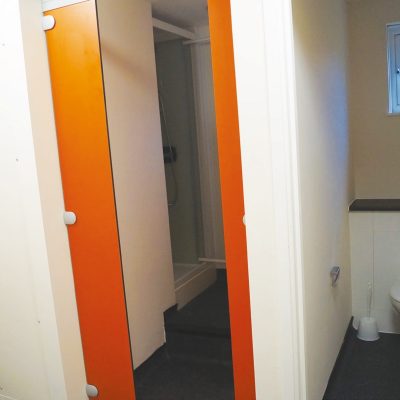 Slotting a shower into an un-used space makes great sense and the Kineprime Glass is perfect for a recess or a corner and comes in a choice of sizes to suit most situations.