Why Plumbers of All Ages Love Shower Cubicles

Plumbers love shower cubicles because they’re so easy to install.

There’s no need for grouting, silicone, or tiling – and there’s very little mess to deal with afterwards.

This means that they can be installed within the space of a day, which is great news for plumbers who work on price.

You might think that younger plumbers would be more willing to experiment with shower cubicles. But we recently learned that even older and more experienced plumbers find them considerably easier to work with.

An Overworked Generation of Plumbing Veterans

Plumbers and installers are in short supply in the UK. Meanwhile, the workforce is ageing. Life expectancy has increased, there is no longer an official retirement age, and pension ages are increasing. There are simply not enough young plumbers being attracted into a profession that is, more often than not, an excellent career choice offering opportunities for safe and steady employment.

The education system is addressing this issue via vocational college courses, and the industry itself is responding by increasing the number of apprenticeships available. Nonetheless, it still feels like our stock of plumbers and installers is dwindling.

As a result, plumbers tend to be exceptionally busy all the time. They work immensely long hours as they try to meet demand. And as the job involves a lot of work in cramped spaces, as well as a lot of heavy lifting, twisting, and turning, work can take a physical toll too.

This can be tough and physically-demanding work for plumbers of any age. Shower cubicles, though, are so easy to work with that they lighten the load in more ways than one. 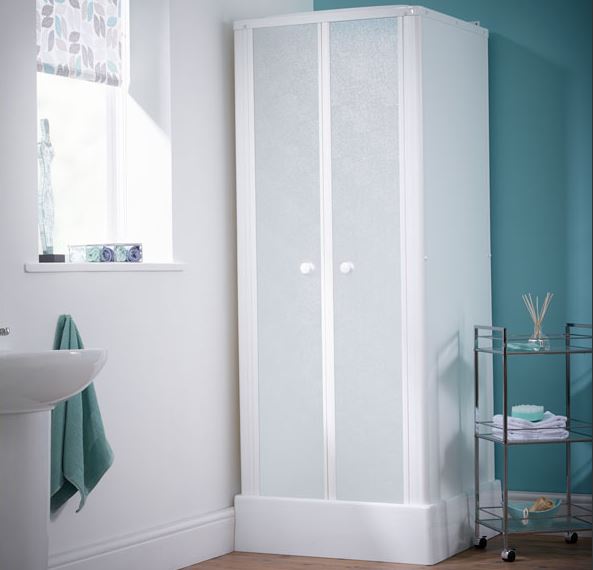 Mark Dempsey is a sixty year old sole-trader plumber who’s been in the profession since leaving school. After years of hard work, he recently needed an operation on his elbow. He thought that this might make his job harder, but a domestic shower refit made him recognise the benefits of shower cubicles, and in particular the intuitive Kinedo range from Saniflo.

“At a customer’s request I fitted a Kinedo Consort shower cubicle from Saniflo, whose pumps I’ve been installing for years. I didn’t realise just how quick and easy these integrated cubicles are to install until I attended an on-site training session with the Saniflo technical guys.

“I did another Consort installation before a customer asked me to install a Kinedo Eden shower cubicle to replace a leaking enclosure. This attractive unit has internal glass panels, but the installation process is pretty much the same and it enabled a rapid, hassle free solution that had minimal impact on the family.

“This household had just one bathroom, so it was imperative to get the bathroom fully functional as soon as possible. Once the old enclosure was removed it took me under half a day to install the Eden. Because of the internal panels I didn’t have to go back and tile or grout, so no drying time was needed. The unit is watertight without the need for any silicone so it was operational on the same day. A real help for the customer.”

Once You Install One Shower Cubicle, You May Never Go Back

Since installing his first shower cubicles, Mark has been recommending the range to more and more customers. And customers love Kinedo shower cubicles just as much as plumbers – they look good, but they’re also highly durable and very low-maintenance.

There’s no grout to discolour and no unsightly silicone to maintain, so the cubicles look pristine for years. There’s no risk of mould developing, and the Cristal Plus on the glass panels eliminates the issue of limescale build-up and water marks, so they are easy to keep clean and tidy.

“Installing the Kinedo range has enabled me to maintain margins and labour rates but also to increase customer satisfaction,” said Mark.

“Everyone these days wants a quick fix. Shower cubicles give you that, but with no compromises on quality or durability. They are easier to install, which makes a difference as I get older, but they also tick all the right boxes for the customer. It’s a win win.”

For the next generation of plumbers, shower cubicles enable a swift job to be completed while maintaining good daily rates, while avoiding the potential long-term health risks associated with the trade.

We offer extensive support and training for plumbers and installers to ensure that your shower cubicle installations are hassle-free from the start.

And like Mark, we’re convinced that you’ll love our cubicles enough to use recommend them repeatedly, no matter how long you’ve been in the game.